With little news from last night’s council meeting, I will give an update on Downtown Stow, in the form of Frequently Asked Questions:

There was an article in the newspaper about the death of the term “Downtown Stow.” You can call it “Project X” for all I care. It’s still on the tracks, and there are more and more reasons to believe it will come to fruition.

What is going in?

Where is the process?

We are in discussions with several accomplished developers, who have different visions for the 16 develop-able acres. It’s not a process we are going to rush, but pieces are falling together. I’m hopeful we are going to approve a master plan in the next 6 months, after extensive public input and comment.

What about the residential property the City wants to buy?

Last night, council heard a first reading on legislation to purchase a residence between the Post Office and the Senior Center. See the white-outlined property in the photo below. 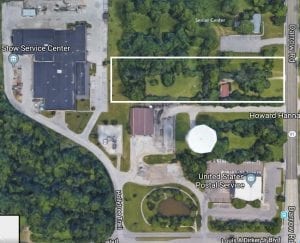 Does the City need to buy it?

By buying this 1.5-acre tract, the city would expand the possible uses on the north side of the water tower. The various elements of Downtown Stow should be contiguous. Practically speaking, parking will be a challenge if we can’t connect the development. This residential parcel is one of two barriers to contiguity (also the Post Office). Buying this land is not an absolute necessity, because we can connect everything by a walkway through the city’s property to the west. But it makes a lot of sense.

Does the City need to buy it now?

This is a better question. It would be logical to wait until there is a tentative plan for development of that land before diving into this investment. But then again, you can lose a deal by not striking while it’s on the table.

How about the price?

The City has negotiated a price of $231,000. On the one hand, it’s significantly more than the property would be worth to a home buyer. On the other hand, it’s less in today’s dollars than the City spent in 2002 and 2004 for the neighboring Senior Center parcels.

Can we do it without taxpayer dollars?

This is a fair point. Instead of buying the land ourselves, a developer could front the cash. That would seem to be a superior plan. But either way, the economics don’t change. The original idea was to use the city’s land value to leverage millions of dollars of development, giving free or reduced ground rent as the city’s contribution to the project. And that concept remains in place. Whether we pay up front, or the developer does, it works out the same way in dollars and cents.