Here are my notes from last night’s city council meeting:

New projects – This meeting was heavy on planning approvals for various projects:

Omni Villas – A few years ago, the Omni group developed an 80-unit senior and independent-living facility on Allen Road. It was a huge boon for our tax base, as they invested $30 million in the project. People think it is really a great place so far. … The Omni folks returned last night, seeking approval to build another 35 units, of between 1,200 and 1,800 square feet, with an all-inclusive monthly rent of about $3,500. It’s another great project, and it will sit adjacent to their initial development, with access via Hudson Drive (across from the storage facility). It was approved by a 7-0 vote.

United Car Wash – At long last, there was a proposal to develop the commercial/retail vacant property that sits between Sheetz and the Route 8 ramp on Steels Corners. The proposal was for a car wash. It held an easement to share the Sheetz curb cut, and it appeared that they had a large enough loading zone for entering cars to be out of the way during a busy Saturday in March. My concern was, what happens when these cars leave the car wash on busy days? Anyone who entered via Route 8 could not exit in that same direction, because the Sheetz egress drive has a “left-turn only” designation. That means cars seeking to go west would be left with these options: (1) turn right and then find a place to U-turn (illegal), (2) turn right and drive to the Seasons Road or Graham Road ramps (inconvenient), or (3) just make the left and cross your fingers (illegal). The developers pointed out that cars could weave their way behind Sheetz and onto Hudson Drive. I don’t see that happening. Anyhow, I voted “no” and so did Councilmembers Lowdermilk and Harrison. But it passed by a 4-3 vote.

Former Baumann’s Florist Property – The Baumann family seeks to rezone their Hudson Drive/Ritchie Road property from Industrial to Commercial. They suggested there was a possible suitor to build a restaurant/coffee shop, if rezoning was approved. I will not vote “yes” on this — only because Jeremy McIntire will be sitting in my council seat when this comes for a third reading in January. But I’ll be in favor in my capacity as a resident/neighbor. 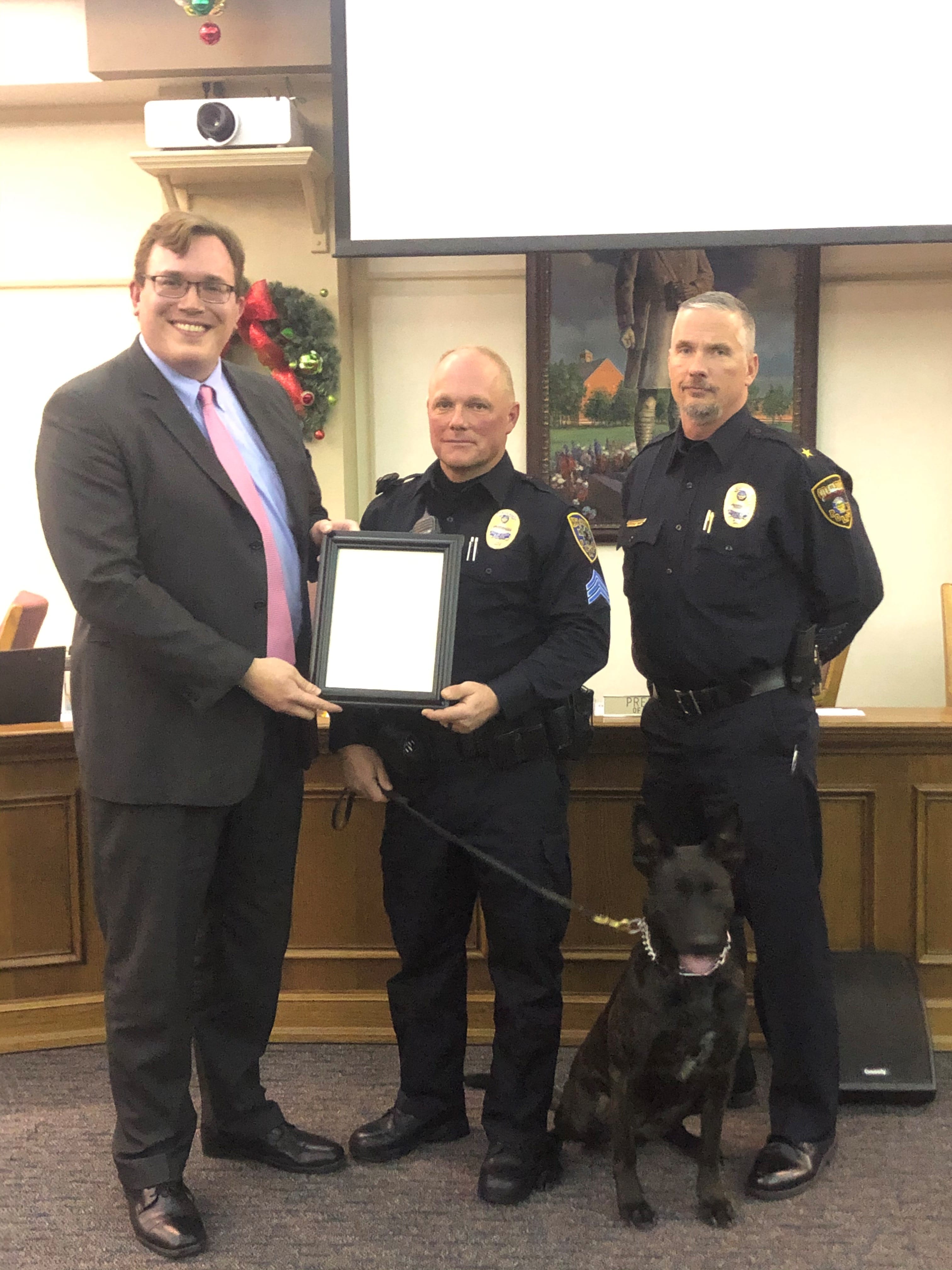 On August 7, 2019, Stow officer Steve Miller and his K-9 Officer Kado responded to a call from Richfield for mutual aid. There was an adult woman missing for 3 days, and they suspected she could be located in a large wooded area near Route 271. Upon arriving on the scene, Kado used her scent to track down some of the woman’s personal belongings–near a steep embankment. Kado then directed the search team up the embankment, where they found the woman. She was in bad shape, but she survived — all because of Stow’s great officers! We commended both officers last night. Incredible story.

For the first time in a decade, council amended its laws regarding parking on public roads. As you are probably aware, you aren’t allowed to park on the hydrant side of the street. Last night, council amended the law so that the hydrant-side rule applies equally to private roads, which we have in some condo developments. We also clarified that you can park on either side of a cul-de-sac, as long as you’re at least 20 feet away from a hydrant. … We don’t go crazy enforcing these laws because (1) we have better things for our officers to do, and (2) we aren’t interested in playing “gotcha” when folks have guests over for Thanksgiving, etc. Rather, we wait for complaints, and then our officers attempt to find the owner so they move their car without a ticket.

Our society is becoming so wimpy. Ninety percent of Americans celebrate Christmas, yet our municipalities are afraid of the portion of the 10% who want to take fun from everyone else. So you’re seeing a lot of Christmas celebrations be removed (under the pretense of cost savings). Anyhow, I give great credit to Mayor Pribonic for going the opposite direction. When he was first elected last year, he announced that he was going to bring back the city’s holiday decor. Then he followed through. … On December 5, from 6-8 p.m., Stow will have its first tree lighting event in many years. Santa will be there!

We are about 35% complete with our leaf pickup program. The winter weather definitely set us back. But we intend to catch up this Saturday with 4 crews out.

My tenure on City Council is almost over. In the next week, I will be announcing what I’m doing in 2020 (and beyond) in government. You might be surprised. But don’t be surprised when I continue to use this blog to communicate to the public about what is going on in government. Council will meet for the last 2019 meeting on Dec. 12.